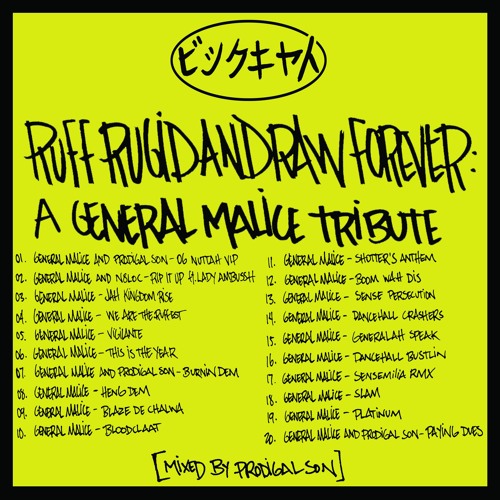 It’s with a heavy heart I present ‘RuffRugidandRaw Forever: A General Malice Tribute [Mixed by Prodigal Son]. I included a collection of my favorite tracks and collabs with Clint aka General Malice. He is alive, and slowly recovering, but the road ahead is going to be long.

Sara and Clint have always meant so much to me, and I failed in not letting them know enough. I miss her, and the important talks we had on her couch about mental health, perseverance, and strength. She was strong. Clint is strong. My heart aches for him and his family.

The global junglist network has been holding its breath in shock all week. On a personal level, I have reconnected with many old faces I’ve long since pushed away or forgotten about. Sara brought us together again, and that’s what she would have wanted. Unity. Family. Energy. Junglists worldwide, uniting as one, partying like it’s our last. Smiling.

This mix was made with love, sweat, and tears. It’s arguably the best mix I’ve ever done in my life. I haven’t mixed Jungle or Clint’s music in almost 10 years. I’ve never felt so many emotions at once behind the decks. I wish I could do more. I want to do more, and I will.

Clint, I love you, brother. I hope your recovery is swift.