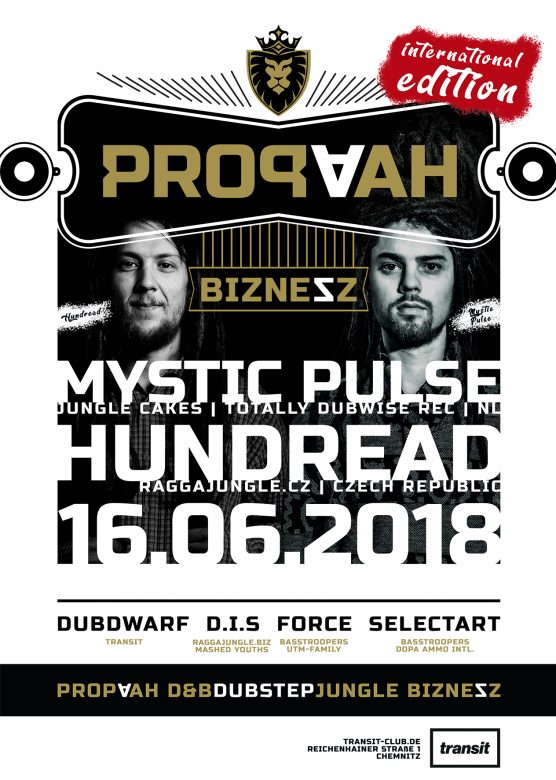 Interview by Mr. Hundread himself:

Who is Mystic Pulse?
Well that’s a good question to start with. I am a studio producer most of all. I produce anything within the, what I like to call, dubwise area. That’s everything from dub to jungle. Even tough people think I produce raggajungle and reggae drum and bass music, I don’t. I produce a lot of dub and reggae music as well. It just needs to be released. Occasionally I do shows as a DJ and selector, but mostly I’m in the studio. And yeah, that’s it, I think. It’s hard to describe yourself, isn’t it?

Yes, it could be, but your answer describes exactly what I was aiming for with my question, so thank you very much.
My second question is about your musical story. What brought you into music and how was Mystic Pulse born?
Actually, when I was little bit younger, I didn’t grow up in a musical environment at all. I became in-terested in music when I first saw the DJ gear and stuff – the knobs, you know? I wanted to have a DJ mixer, which I bought when I was around 13 years old and then, at some point, I felt in love with the turntables. Because I lived in a small village and internet wasn’t so big thing as nowadays and I didn’t even have computer at home, I saw turntables very occasionally, but I never knew what it really was. So at some point, when I was little older, around 15, I bought a turntable and I had to do a lot of effort to buy some records, because in small village, they didn’t sell any and I couldn’t order it from the in-ternet as well. Then, at some point, I became interested in turntablism – like scratching and I started to DJ in a hip hop group. That’s how I started and still, even now I love the old boom bap kind of hip hop.
So yeah, that’s how I started with the music. Then, at some point, I got interested in making beats for the hip hop group, but I found it very difficult to make them sound right. I would just chop up some samples, add some kicks and snares and really got fascinated by the fact that sometimes the produc-tion sounded alright but sometimes it sounded very shitty. So I developed some interest in music mix-ing mostly and when I finished high school, I decided to study audio engineering. By that time the hip hop group stopped being active and I focused mainly on recording and mixing music. And then I needed a band for my final exam, so I started recording local reggae band. I always liked reggae, but never thought about producing it myself. But after recording and mixing this band, trying to do some dub versions just for fun, I developed skills to record, mix and produce reggae. And then, at some point I thought: “Yeah, I’ve got a clear musical direction which I want to focus on”, and that’s how Mystic Pulse was born.
The reason why I picked this name is that I’m never really sure what kind of reggae influenced music will I make.

So you finished high school and went to study audio engineering?
Yeah, I worked first, for two years, at the local vinyl shop and all the money I earned there I spent on studio equipment – monitors, sound card, etc. And then I did bachelors in audio engineering at SAE.

Nice! Can you please tell us more about SAE? Is it like official school or just some kind of paid course anybody can go to?
Well, SAE is a international institute where I enrolled for audio engineering course, that was more fo-cused on recording and mixing than on production. After the first year I enrolled for bachelors degree, which was very nice opportunity. The first year is a lot about practice – recording, mixing. Everything done on proper analog consoles. And the second year is more theoretical – doing researches, writing bachelor’s thesis.
Interesting thing about my studies is that I did an internship at Galaxy Studios in Belgium which was really nice.

What was your first release, where and when was it released?
I think the first one was on the label called Rasta Vibez and there were choons like Live Up and Selec-ta. I send them to Marco, who is a label owner, but he didn’t like those tracks at first. So I made a Herbalist remix, which was released as a 10 inch. But it was released under Unknown Artist as it was bootleg. And then, later on, the Live Up and Selecta choons were released as well. So the very first record is The Herbalist 10 inch from Rasta Vibez.

So Rasta Vibez is not your label, is it? For some reason I thought it is.
Officialy not. The founder is Marco from Triple Vision and me and a guy called Pixel were releasing there at first. And then some Gunmen tracks were released there as well. So officially it is not my la-bel, but I’ve done a lot of work for them.
Talking about labels – I’m gonna start my own label. The reason is that I’ve got about 25 dub tracks ready and I haven’t really found a suitable way to release them that I would be comfortable with. I recorded the music, shot a videoclip and I was thinking that’s the same what label would do, why not to start one?
At the moment everything is done, release is being pressed and it will be released on 14th September 2018.

What other labels are you signed to?
It’s Totally Dubwise and Jungle Cakes. Some of the tracks released on Rasta Vibez appeared on a compilation on Fokus recordings, but that’s not official release.

It looks like you worked with some very interesting artists. Working with who did you enjoy the most?
Well, let me see. What I really liked was when Fleck came over recently. I was really excited to hop in the studio and produce some actual music with him. We had a really good time in the studio. We didn’t sleep a lot and spent a lot of time producing music and we nearly finished two tracks. I don’t know many people in Rotterdam who I can talk to about the music that I produce, so it was really nice to have someone in the studio who does the same thing as you do. Well, I think he’s more ahead of me, obviously, but still, it was really nice to work together on some music.

At the moment you teach music production, right? At the same school you studied at?
It’s a different school actually. I finished my bachelor degree at SAE and few years later I started teaching at MPA (Music Production Academy) in Rotterdam. I work there as a teacher during the week. I have clasess of one year course of music production and I help students to develop their arrangement and mixing, I help them finish their ideas and make them sound good. It’s really nice to talk about music all day long.

I noticed you run a project under your personal name.
Oh yeah, that’s what I do as an mixing engineer. So obviously I like mixing and producing reggae, but since I’m educated as a mixing engineer, I’m really interested in mixing commercial sounding music. I like mixing reggae, but it’s different type of mixing. You use a lot of echo and reverbs and it has to sound really spacious. But I ralso eally like the modern type of mixdown – that commercial type of sound. The modern way of approaching the mixdown. So that’s what I do for living besides teaching – I mix music for different artists and bands. Which I’ve actually always done and local people knew it, but at some point I felt like moving it to next level, so I build nice website where I can display all my work.

How does the reggae / jungle scene look like in Netherlands?
In Netherlands? Well, first as far as jungle goes, there’s not much going on. There are few events, but as you might have noticed, I don’t have many bookings here. Which is unfortunate. But that’s mainly because there is not a lot of promoters and gigs pushing that scene. And even if they would book artist like me, it would be just for the first one or two hours. There is no night with proper ragga, drum and bass, jungle all night long. Occasionally, very occasionally, very, very, very occasionally. There is also not a lot of producers producing this music.
Very strong scene here in Holland is the sound system one. Like the UK roots steppas kind of scene. Last couple of years it developed heavily. So there is a lot of sessions playing mainly dub music. But they don’t really invite jungle to the sound system. As you might know, I also do performances as a selector, playing reggae and dub on a sound system, which I really like as well. There are sessions al-most every month and sounds like King Shiloh pushing the scene forward.
When it comes to reggae, there are big shows every once in a while, but mostly live bands.
So there’s a lot of reggae, there’s a lot of sound systems, there’s a lot of dub, but there’s just not a lot of jungle for some reason. I don’t know. You would say Holland is perfect country for that, especially Amsterdam.

My last question was about your future plans, but we already talked about it a little.
Yeah, so it’s the label, the videoclip. The videoclip we filmed last year. My friend filmed and edited it. It’s gonna be pretty good video, I think. It’s not simple, you know. We really tried to record a really nice video. When that’s gonna be released, I’ve got few choons lined up for the label. I’m gonna kick it off myself and see what’s happening. Actually I’ve got a song with Macka B as well. That’s pretty big one.
The project with Fleck is gonna be nice. Once it’s finished, we gonna send it to the labels and see who is interested. The chops are pretty decent, so I think it’s gonna be a nice release. I feel pretty happy about it which doesn’t happened very often. That’s a good sign I think.
Also, as you might noticed, most of my releases are remixes and sometimes even bootlegs. So my fu-ture plans are to … well I’m not gonna say stop doing that, but what I’m gonna release next, all the project are 100% original productions written and composed by me. There’s no sampling, bootleging, remixing, they are all original. I’ve been working on that for a while. There is a release with Daddy Freddy – Wa Do Dem – that’s the first one that’s my original stuff. Also the project with Fleck – it’s no remix, all original recordings and compositions. So that’s what I want to do first – show people what I produce as an artist and then later on maybe get back to remixes.