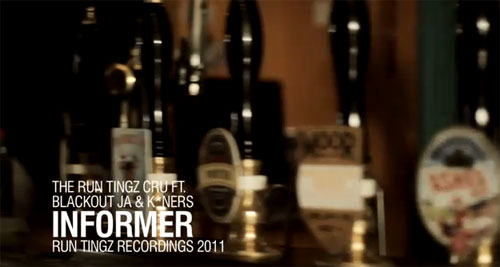 Informer’s rowdy bassline, rolling beats and chirpy horns create a tough Jungle riddim expertly ridden by Blackout J.A’s gravel throated ragga flow, and rising Hip Hop star K*Ners insightful lyrics. The Run Tingz Cru take inspiration from the old school Jungle sound of the 90s and bring it up to date with the heavy basslines and modern production techniques that dominate our airwaves. The Run Tingz Cru’s first release of 2011 has once again raised the bar and offers something for fans of Jungle, Drum n Bass, Reggae, Dubstep, Hiphop and Grime alike.

The Informer video is expressive of the pure hyped-energy typically experienced at their live shows. The video features cameos from Walford’s original slappers, Pat Butcher and Peggy Mitchell who run into some very scantily dressed Junglists, follow them to a club and end up throwing down some serious break dancing moves on the dancefloor! The video communicates the fun, jumped-up and rowdy energy that the Run Tingz Cru brings to the rave.

Informer sets to build on the labels already impressive 2nd release “Born Inna Babylon”, which was described by I-Dj as a “Big time feel good reggae roller”, received airplay from the likes of KOOL FM and charted at No.2 in the Juno DnB download charts, second only to Shy FX’s Raver.

Run Tingz Recordings have a number of releases lined up this year, featuring (amongst others) Congo Natty legends TopCat and Lady MC, David Boomah, Solo Banton, Blackout J.A and remixes of YT’s Hustler… along with a European tour, and a summer packed full of festival shows, 2011 is the year that the Run Tingz Cru are bringing Jungle back in a big way!