Available now on 12″ & 7″ Vinyl. Digital package September 2014. At the start of 2014 Run Tingz broadcasted a succinct message of next level intentions; they weren’t exaggerating. 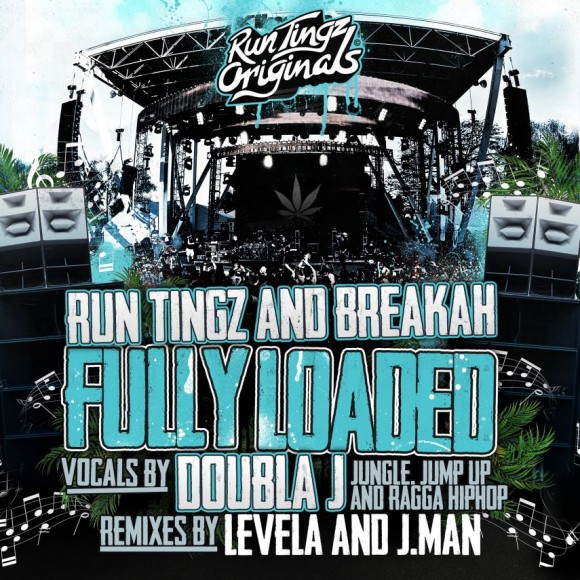 Having exploding into the year with a spotless ‘Best Of 2013’ collection and J.Man’s skank-savvy Jungle bomb ‘Road Block’, they’re now ready to unleash their biggest, boldest and most confident manoeuvre to date; Run Tingz Originals. Building on their established pedigree for original vocal productions, Bristol’s leading Jungle imprint digs deeper into the scene’s inherent foundations with the first in a series of completely original musical compositions.

A document of fundamental roots and future; ‘Fully Loaded’ is poised to set the summer festival season ablaze. A joint-force creation by label manager Ed Garrett, Jungle Drummer’s-protégé Tom Derryman (aka. Breakah) and guitar virtuoso Jonny Evans; recorded at the legendary J&J and Invader Studios in Bristol which are owned by none other than Portishead’s Jim Barr and Geoff Barrow, the project is steeped in heritage and rich in contemporary production. Add to this the distinctive lyrical patter of German based vocalist Doubla J; the first of many future projects with Run Tingz, Doubla was headhunted by the label after last year’s impeccable remix of Dread Squad’s ‘Full Time’ on their ‘Digital Rules’ EP. A prize player in this multi-faceted project, his unique vocal talent is already setting a new benchmark in Jungle, Reggae, Hip Hop and Bass Music alike.

Built entirely from organic elements, everything from the warm organ blasts to the slick, sick guitar licks to the party-minded sample discharges and the full-bodied insatiable drums, everything about ‘Fully Loaded’ screams serious class and authenticity. Complete with Doubla’s dancehall dynamics, it’s the first time the label founders have expressed their influences, inspirations and passion at this level… And it leaves you hungry for more!

In-keeping with their top rankin Junglist profile, Run Tingz have also curated three killer remixes. Each one designed for raw floor devastation, they cover all corners of the ever-expanding Drum & Bass universe. First up is the signature UK Jungle remix from the Run Tingz Cru themselves. Retaining the big live drum swing and distinctive organ hums of the original, they super-charge the groove with finesse. With skippy breakbeats, mischievous fills and an arrangement that just keeps on giving, it takes the label founders full circle as they remix their own original material with full attention to dance floor destruction.

Next up is Levela. One of the scene’s most unique individuals, Levela’s productions have found their way across the world via the likes of Datsik and Skrillex. With a powerful jump up sound that has infiltrated ears way beyond the genre, Levela’s profile is skyrocketing by the day. Check his gnarly bass-bugged rub of ‘Fully Loaded’ and you’ll understand just why.

Last but definitely not least is Run Tingz’ very own J.Man. Fresh from causing his very own ‘Road Block’, the Bristol badman unleashes a deep Jungle jam that’s underpinned with big bulbous subs, nagging skanks and drums that roll relentlessly. Instant dancefloor sweetness, J.Man has an innate ability to construct a riddim that fits vocals as if it’s the original itself. This is no exception.

Next level intentions delivered with confidence and clarity: Expect heaps more killer productions in the near future. Locked and loaded in the Run Tingz roots chamber, this is the start of a very exciting adventure for the highly respected Bristol beat boutique.