“From the far horizons of the unknown come transcribed tales of new dimensions in time and space. These are stories of the future, adventures in which you’ll live in a million could be years on a thousand maybe worlds”. 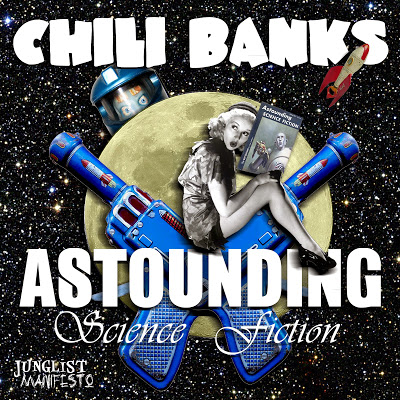 Astounding Science Fiction is Chili Banks’ 3rd full length LP concept album. Since the inception of Junglist Manifesto Recordings in 2009. The album is a concept album based on old time radio science fiction stories from the 40’s and 50’s. The stories first appeared in pulp magazines of the same era written by some huge names in sci-fi as well as some obscure ones. The tracks are audio vignettes, they are stand alone stories from a time when the world and universe was a less discovered place. Science fiction samples are mixed with organic drum sounds, sub basses, and a mix of new and old techniques. The album serves as an exploration in the art of sampling and takes a step outside of dance floor Jungle/Drum & Bass.

If youd like to support by buying the album its out now at all your finer digital retailers! beatport.com, itunes.apple.com