Mashed Youths Records – Back To Ya Roots (MYRD06) 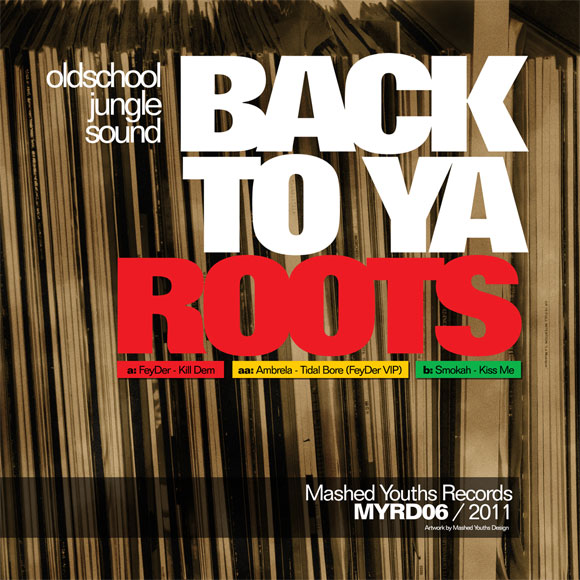 So, Mashed Youths Records bring their sixth release called “Back To Ya Roots EP” dedicated to FeyDer’s birthday. On title you can understand what the vibe flavoured on this release. This is oldschool jungle! and u remember your roots?.
This release contains 3 tracks, 2 of them from Mr. FeyDer:
“Kill Dem” – This track was produced some time ago for the Bay B Kane remix competition and got a lot of positive feedback but unfortunately did not win. Listen gangsta sound from dark streets of 94 year.

“Tidal Bore (FeyDer VIP)” – This is a remix of samara producer, Ambrela, who produces music in various styles from minimal techno to light drum’n’bass. This track was chosen for remix not by chance, because it reminded him of that rainy mainland and the country where it all began – UK. Just what was needed to give the shape and British accent and “inspire the soul” to the composition.

And of course, the main surprise of this release. Is sensational producer from St. Petersburg, Smokah, with his huge quantity of musical merits. Composing in a wide variety of genres, now with a few vinyl and digital releases under his belt, and tunes to unbalance your body with his insane style.
“Kiss Me” – One of the his creations in jungle scene, once again proving that we still dont know much about this man and his possibilities. Again and again Smokah shows that he can somehow manage the amen break in his hands, combining dense heavy drum part with a gentle celestial atmosphere and made a revolution with Dread Bass.

Buy this release @ Juno or Beatport

And a bonus track for this release:
original tune, Ambrela – Tidal Bore which u can download for free @soundcloud.