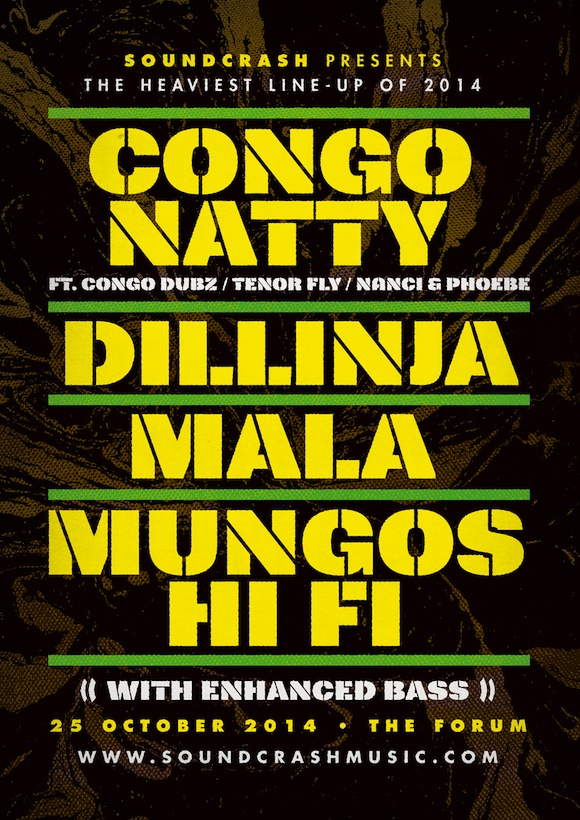 This Autumn, Soundcrash proudly presents one of the heaviest lineups of 2014.

With an enhanced sound system brought in especially for this monster event, all roads lead to The Forum, London on Saturday 25 October 2014 for CONGO NATTY featuring Nanci + Phoebe, Congo Dubz, Tenor Fly + DILLINJA + MALA + MUNGOS HI FI playing an all nighter, this time with extra bass. Ring.The. Alarm and put your lighters in the air. It’s about to go off again…

A man that needs very little introduction and whose years of intensive drive and packed out shows have cemented his place within the Junglist music movement as a talented DJ, MC, production extraordinaire and label owner; Congo Natty joins Soundcrash once again for a Congo experience. This time, the whole clan is in attendance to celebrate 20 years of Jungle; Congo Dubz, Tenor Fly and Nani + Phoebe. Expect high-energy, high-octane selections, junglist classics, all on the enhanced sound system!

There are few producers on the drum’n’bass scene who are as respected and revered as DILLINJA. With his trademark combination of dirty stomach-churning bass lines and tighter than tight beats, his reputation has been secured as one of the most influential producers in drum’n’bass history, as well as one of the scene’s most called-upon remixers, having worked with everyone from David Bowie to Bjork and Basement Jaxx.

Digital Mystikz founder, MALA brings his variety of world-inspired, dub-influenced sounds back to the Soundcrash stage. Finding Digital Mystikz alongside friend and fellow producer Coki they were able to share dubstep on a much wider scale, snowballing the popularity of the genre in the early 00’s. Since then, the DJ/ Producer/Label owner has taken his work in a new direction with his Mala In Cuba release on Brownswood which gathered critical acclaim from music lovers all over the world. His continuing exploration of musical frequencies within the dubstep genre helped to cement his position as one of the greats.

The Glasgow based sound system, MUNGOS HI FI follows the original Jamaican sound system tradition, and in 2014, they don’t need much of an introduction… The group was founded in 2000, with the crew writing, recording, producing and performing their own brand of reggae and dub, working in collaboration with other artists and producers in their local area. The sound system quickly became part of a wider reggae network with a hectic schedule of live performance, both djing and as a sound system at clubs and events across the UK and Europe to festivals and stages at Glastonbury, Woman and Outlook. The new album ‘Serious Time’ from Mungo’s Hi Fi is out now , June 2nd and available from Scotch Bonnett Records.

More information and tickets on soundcrashmusic.com.